A web application framework enables developers to build and run applications for the web without having to write all the code from scratch. You can think of a framework as a software library that makes app development a faster and more intuitive process for both developers and their clients. Read on to learn more about the different types of web applications and their benefits.

Depending on the project they are working on, developers today can choose one framework from a variety of web application frameworks. Or they can combine the functionality of several frameworks.

All this sounds technical and it is, but these processes are essential for a web app to provide functionality to users. Widely used back-end frameworks or libraries include Ruby on Rails, Django, or the .NET Framework.

Front-end frameworks handle the part of the website or application that the users see—the interface of the app as displayed within their web browser.

This interface may include animations and other dynamic elements that don’t require a page reload, as in a single page application (SPA). Front-end frameworks are often written in JavaScript and include Angular, React, and Vue.

Modern web frameworks are generally based on the Model-View-Controller architecture which separates the interface from the logic of the app. It’s the integration of these separate elements that create the functional app. Let’s take a quick look at each of these elements. 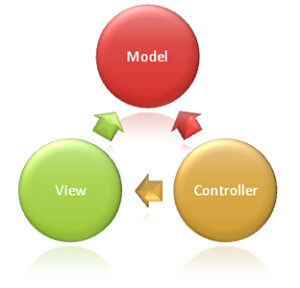 Why Do We Use Web Application Frameworks?

At first glance, web application frameworks may look complicated. But in the right hands, they speed up app development times by reducing repetitive work and allowing multiple developers to collaborate more effectively.

Writing code for an app can be a time-consuming, repetitive process. Web application frameworks provide patterns and shortcuts in the form of bits of software that developers can reuse as needed.

We’ve already seen that web application frameworks help developers save time. But what else can they do?

It’s in no small measure due to web frameworks that building web apps has become easier than ever—so much so that even small businesses and organizations can afford to create and maintain an app.

Web frameworks don’t magically create apps, but they provide developers with a useful toolkit that helps them get the work done faster—and often, avoid errors and other security problems. No wonder then that frameworks are so widely used today.

Do you have a need for a business application, or just have more questions on application development. We’re here to help you out! Please feel free to contact us using our contact form or if you prefer call us directly now at (888) 750-8860.

Edward Kuhn is a software architect who leads technical teams across a diverse range of projects using various platforms for Insurance, Medical and Manufacturing Industries.
Categories
Most Viewed
Facebook Twitter
Close
Most Viewed
App Development
We use cookies on our website to give you the most relevant experience by remembering your preferences and repeat visits. By clicking “Accept”, you consent to the use of ALL the cookies.
Do not sell my personal information.
Cookie SettingsAccept
Manage consent

This website uses cookies to improve your experience while you navigate through the website. Out of these, the cookies that are categorized as necessary are stored on your browser as they are essential for the working of basic functionalities of the website. We also use third-party cookies that help us analyze and understand how you use this website. These cookies will be stored in your browser only with your consent. You also have the option to opt-out of these cookies. But opting out of some of these cookies may affect your browsing experience.
Necessary Always Enabled
Necessary cookies are absolutely essential for the website to function properly. These cookies ensure basic functionalities and security features of the website, anonymously.
Functional
Functional cookies help to perform certain functionalities like sharing the content of the website on social media platforms, collect feedbacks, and other third-party features.
Performance
Performance cookies are used to understand and analyze the key performance indexes of the website which helps in delivering a better user experience for the visitors.
Analytics
Analytical cookies are used to understand how visitors interact with the website. These cookies help provide information on metrics the number of visitors, bounce rate, traffic source, etc.
Advertisement
Advertisement cookies are used to provide visitors with relevant ads and marketing campaigns. These cookies track visitors across websites and collect information to provide customized ads.
Others
Other uncategorized cookies are those that are being analyzed and have not been classified into a category as yet.
SAVE & ACCEPT
Close
Go to mobile version